A Guide to Situational Items for Roam Players 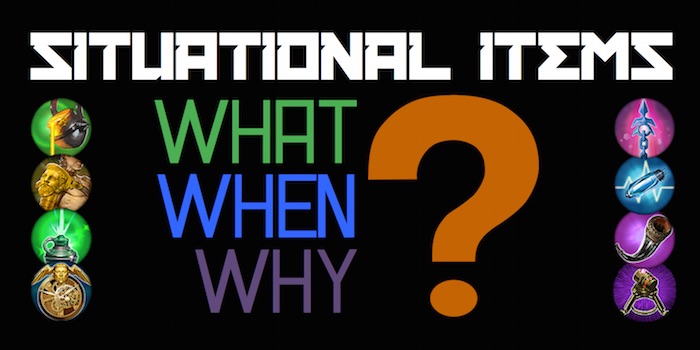 One of the most common questions from Vainglory players is: “What items should I build?” While we do have a resource here at Broken Myth that documents the best and most popular builds for every hero, the brief build descriptions there don’t go into much detail for situational items – the builds more or less assume you know how to build situationally. This article tackles this question, giving a more in-depth look at situational item building for ​roam​ heroes. A follow-up article for situational items on carries will be coming in the future.

Aftershock – By far the most common late-game offensive item in roam builds, Aftershock can be splashed into any hero’s build to add some crystal damage that doesn’t scale with crystal power. It’s a common choice for Catherine, Fortress, and Ardan. Aftershock makes Catherine’s Merciless Pursuit sting more while also reducing her cooldowns. Fortress enjoys the extra burst damage made available through Aftershock. For Ardan, Aftershock reduces the cooldown of Vanguard, and its passive synergizes well with Blood for Blood, which often comes off cooldown in 3-5 seconds. On roams, Aftershock should be built as a third item at the earliest, and usually as a fourth item.

Atlas Pauldron – This item is extremely useful for its ability to counter auto-attack reliant carries such as Ringo, SAW, Krul, Rona, Glaive, Vox, and Blackfeather. It’s typically most effective to build this item on Catherine, Fortress, and Ardan, since these roam heroes gap close much more effectively than the others. This item is frequently built as a second tier three item on roam heroes, and sometimes first in Catherine’s case. However, its defensive stats aren’t enough to allow Ardan to build it as a first item in most games – Ardan would simply melt in teamfights if he attempted to do so. Ardan, Fortress, and Adagio will usually want to build this item as a second item at the earliest, and more frequently as a third item. If you’re not against auto-attack heroes, you shouldn’t build this item. Atlas Pauldron does little to slow down a Joule (weapon or crystal) or a Celeste, for example.

Crucible – This is a core item in many roam builds. Crucible should usually be built first against teams with an Adagio, so the roam can protect their team against Verse of Judgment, but in other cases, Fountain of Renewal is a better choice as a first item. Also, it’s a great second or third item against other stuns, including Koshka’s Yummy Catnip Frenzy, Skye’s Death from Above, Catherine’s Merciless Pursuit, Celeste’s Core Collapse, Reim’s Valkyrie, Krul’s From Hell’s Heart, and Joule’s Rocket Leap.

However, it’s important to note that many supports actually are unable to block these more difficult stuns (or silences) for their teammates (compared to Verse of Judgment, the easiest stun to block in the game), which means that the support never really uses the active ability of a teamwide Reflex Block effectively. This makes Crucible an 1850 gold item that just adds +600 health. If you often find yourself unable to block these stuns or end fights without using Crucible’s active effect, consider skipping Crucible for an earlier Warhorn or a different situational item in future games.

Clockwork – This is a situational late-game item for Catherine and Phinn. Additionally, a roam Adagio focusing on building crystal power will typically have Clockwork as a core item. Clockwork synergizes extremely well with Catherine’s kit – it reduces the cooldown on Merciless Pursuit for more stuns, and gives her extra tankiness by allowing her to activate Stormguard more often. For Phinn, Clockwork allows more Quibbles and Polite Companies mid-fight, and also reduces the cooldown on Forced Accord such that he can frequently hook in enemy teams twice in the same fight. This item should typically be built as a third item or later.

Fountain of Renewal – This item is frequently the first core item in any support build. When should you build it? Pretty much always. The team heal of this item is absolutely amazing, as it allows you to bring your teammates back from the brink of death mid-fight, and the shield on it helps to protect you against Crystal Power carries in teamfights. Though this is an article on situational items, Fountain of Renewal really isn’t a situational item.

Metal Jacket & Aegis – These two items are the “selfish” defensive items – that is, they are items that are typically built for personal defense only and therefore have little to no team utility. As a roam player, you want to maximize how useful you are at keeping your carries alive, since your enemies will not typically be focusing their damage on you. As such, you should almost never build Aegis or Metal Jacket when you are playing in the roam position.

Shiversteel – For roam heroes, this item is typically built to protect a squishy ally from a dangerous melee enemy. It is often built against Taka due to how effectively the slow from Shiversteel counters Taka’s need to stick to a target to deal consistent damage as well as his escape. In the same vein, it’s also often built to prevent Krul from getting on top of and subsequently shutting down a carry. Shiversteel is frequently built as a second or third item, and sometimes later, after Fountain of Renewal, Crucible, and/or Warhorn. It isn’t always necessary.

Shiversteel is a fantastic choice for Ardan because Vanguard scales with its bonus health. In addition, Blood for Blood is a fantastic gap closer and triggers Shiversteel’s slow. Catherine also works fairly well with Shiversteel – Merciless Pursuit isn’t an instant gap closer like Blood for Blood is, but a stun followed up by a Shiversteel slow can spell death for an enemy. Fortress also works fairly well with the item because of the speed boost from his heroic perk. Phinn players usually will not build a Shiversteel because his movespeed is so slow that he doesn’t really get too much leverage out of auto-attack effects. Adagio gets less utility out of the item because of the penalty on its effect for being a ranged hero, but it can still be somewhat useful.

Warhorn vs. Contraption – Last, but absolutely not least: there are two options to upgrade Stormguard Banner into: Warhorn and Contraption. Warhorn offers a team speed boost, whereas Contraption offers slot efficiency by having built-in flares and scout traps. We’ll ignore the other passive effects of these items, since they are more or less comparable to each other.

For most roam heroes, you’ll want to upgrade your Stormguard Banner once you’ve got about two other Tier 3 items completed to help out your team (more on this in a bit). In the vast majority of situations, I recommend Warhorn over Contraption. Why? While Contraption is slot-effective, most supports will only have five item slots occupied by equipment – one slot for boots, one for Stormguard Banner, one for Fountain of Renewal, and two for any of the following: Crucible, Shiversteel, Atlas Pauldron, or an offensive item. This leaves one space open for those crucial late-game flares, which makes Contraption’s slot efficiency more or less unnecessary. Additionally, Warhorn’s active effect is simply amazing for its flexibility – the team speed boost can be used to engage, chase, or escape. It’s practically always useful, whereas Contraption’s mid-fight utility is questionable in most cases.

So when should you be building Contraption? Really, only on Catherine, and only against Taka. The bonus health on Warhorn benefits Phinn’s and Ardan’s scaling on Polite Company and Vanguard, but it’s just extra health on Catherine. However, the cooldown speed on Contraption synergizes very well with Catherine’s kit. Faster cooldowns mean more stuns and more bubbles on Catherine, which in turn makes her tankier and more dangerous. Against Taka, Contraption is especially a good choice because the flares on Contraption allow you to reveal a Taka’s attempt at escaping from a fight, and more stuns means it’s easier to lock down the slippery assassin.

So you’re probably settled on upgrading into a Warhorn. When is it best to build it, though? Very rarely will you ever rush this item first on a roam hero – cases where you would do this are against squishy kite comps that you anticipate having trouble gap closing against. More commonly, Warhorn will be built either second or third. After Fountain of Renewal, if a Crucible does not need to be built, then Warhorn is often a good choice on heroes such as Ardan, Catherine, and Phinn. Obviously, if you need a Crucible, simply build Warhorn third, after the Crucible. Sometimes, a Warhorn should be delayed even further so additional items such as Shiversteel or Atlas Pauldron can be built. Great usages of Warhorn are typically to engage – Catherine’s Blast Tremor followed up by a Warhorn is devastating, and a Warhorn into an Ardan Gauntlet can catch your opponents by surprise. You should usually build Warhorn if you find yourself needing the extra speed boost to effectively disengage or engage.

And that concludes this article. We hope it’s helpful! Keep an eye out for a follow-up article on situational items for carries.