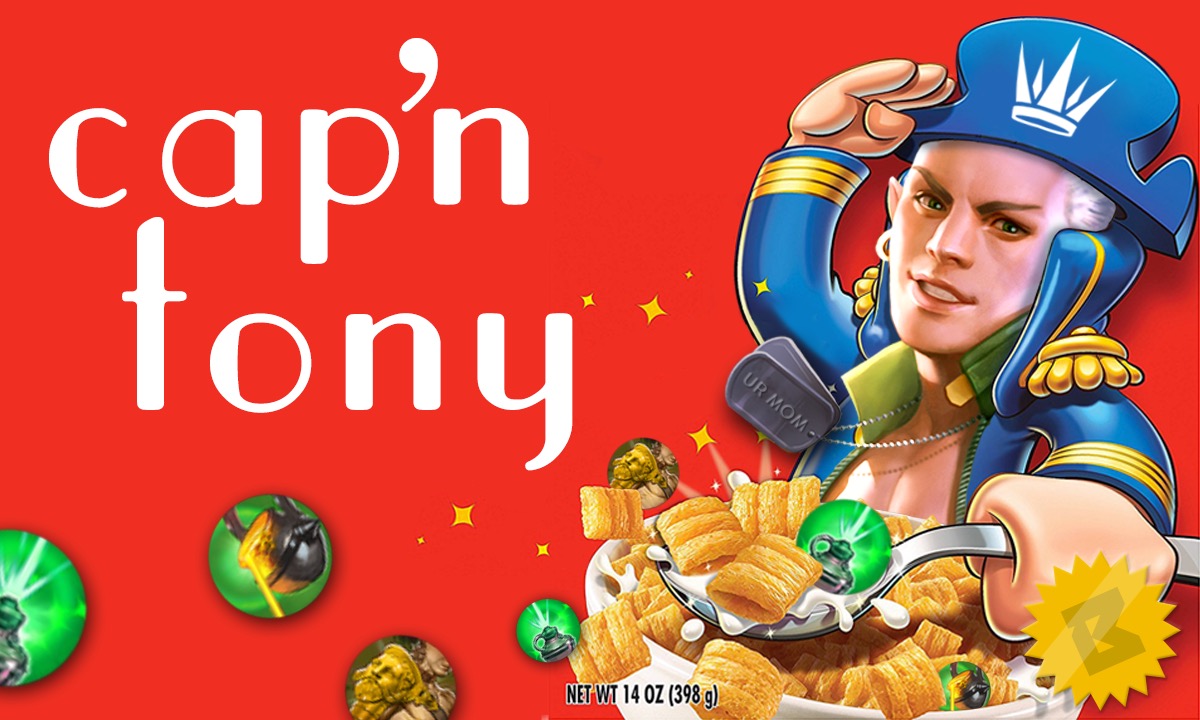 Tony’s own designer, Doomnyr, tells us that their newest dwarven hero is intended to play as a weapon bruiser. As such, it’s a job that he excels in — with empowered basic attacks providing a heavy punch and his taunt making him difficult for a squishy carry to escape. Despite being an excellent weapon bruiser, Tony’s kit also makes for a strong captain frontliner. How can you effectively build and play as Tony in the captain role?

All three of Tony’s abilities provide crowd control and can be played in combination with other heroes, particularly those with high damage skill shots and/or skill shot crowd control, to unlock devastating chains onto the enemy team.

Come At Me (Heroic Perk)

Tony is granted a two second health barrier when he takes damage from a hero. This then goes on a cooldown based on his level. The innate tankiness from the barrier helps Tony frontline effectively. It’s especially useful against bursty heroes, such as Gwen or Taka, to help absorb their upfront damage.

Tony’s next three basic attacks are empowered, dealing bonus damage and briefly stunning his target on the third attack. It also provides a short dash and movement speed bonus on activation. Although the empowered attacks output a chunk of damage (especially in the early game), the stun is the key component as a captain. In the later game, the empowered attacks can also be utilized as a means of pumping up your objective damage for a short while.

Trash Talk taunts a narrow cone in front of Tony. The taunt forces all enemy heroes in that target cone to basic attack Tony for the next .8 seconds (1.2 when overdriven), moving into range if necessary. This ability has been dreamed of by captain mains — it’s incredibly disruptive to the enemy’s offensives and allows you to force a fight on the terms you want, while your carries rain down pain on the enemy.

Chaining it with Jawbreaker (A) is an effective duo to trigger additional damage onto the attacking enemy. If you time it right, you can stun just as the taunt ends to lock them down even longer. Doing so resets Come At Me (Perk), beefing up Tony while he’s under focus fire. It can also be used to disrupt enemy ability usage — if it channels first, any abilities they are channeling are cancelled to force the basic attack. Another use is to pull a low health enemy out from under the protection of their turret for your carry to delete; or, if you are defending a turret, you can pull an aggressor into turret range to land free damage.

Bada Boom is easily one of the most fun abilities in the game. Tony winds up then dashes to the target area. When he strikes, he knocks away all heroes and minions within the area of effect — sending them sailing through the air away from Tony in the middle of the target area.

WARNING: May induce insane giggling. I highly recommend shouting the ability name loudly on voice chat whenever you cast it.

The knock back is incredibly useful to protect your allies (if someone is diving your carries … now they are flying across the Rise), disrupt the enemy team fight, or peel a single foe away. A master of Bada Boom can even send an enemy flying into your turrets, or better yet into your sanctuary.

When playing Tony as a captain, think carefully about how you can protect and synergize with your team by using your abilities aggressively and defensively.

In 5V5, I usually start Tony with Sprint Boots and Weapon Blade. This is typically unconventional on a captain, but on Tony, the bonus weapon power scales with his empowered attacks to hit like a truck at level 1, and increases the taunt time on Trash Talk. This damage allows Tony to defend well against an invade attempt or facilitate a successful one. It also enables him to provide a menacing gank on the opposing laners for the first few minutes of the game.

From there, I usually build like I normally do as a 5V5 captain — rushing whichever item seems likely to be most impactful first (SuperScout 2000, Crucible, or Fountain of Renewal; sometimes Shiversteel or Atlas Pauldron). I tend to upgrade the Weapon Blade into Heavy Steel at some stage, and later in the game finalize that to Spellsword. Tony’s kit synergizes so well with weapon power that this becomes more effective than Stormcrown or Aftershock.

Celeste is perhaps the archetype hero that Tony synergizes with. Trash Talk locks enemies into place, which allows her to supernova them as well as land her stun easily, increasing the crowd control lockdown. If a melee hero attempts to dive her, he can stun them with Jawbreaker, pull them back with Trash Talk, or fling them away with Bada Boom. Similar considerations apply to Baron, CP Joule, Kestrel, Lorelai, Samuel, Skaarf, Varya — all of whom benefit from an opponent who is (briefly) held in place.

Tony also synergizes well with melee heroes such as Reim, Baptiste, and Lance. In these cases, Tony provides coordinated crowd control lockdown that prevents escape and makes landing their respective skill shots easier. Lance and Tony on the frontline is difficult to get through, and the combined lockdown makes it easy for a coordinated team to ensure an enemy is deleted.

Being able to run Tony as a captain provides you with a significant advantage in 5V5 draft. It enables you to take a powerful pick off the table and gives you a flex hero who can be played effectively in 3 roles — jungler, top laner, or captain. Tony is not a simple captain hero to accustom to like Catherine or Ardan. His kit requires thinking and consideration of what to do, but he can be very effective and extremely fun.