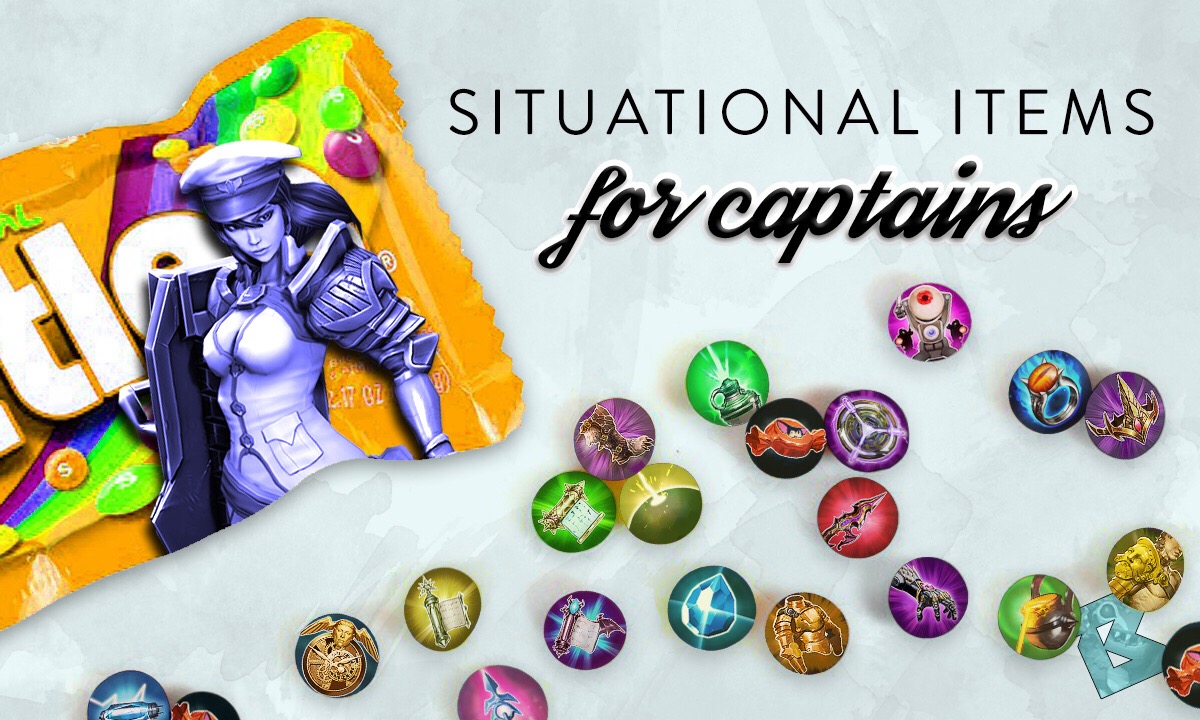 Knowing when to build the right items is the key to success in a game. This article tackles that feat, providing an in-depth look at situational item building for Vainglory captains. Be sure to read up on the counterpart guide: Situational Items for Carries. These two resources augment our new Top Hero Builds page releasing tomorrow. Without further ado, let’s dig in!

Core items take their place in almost every captain build, sometimes being completed as early as five minutes into the game or left until the last item.

Fountain of Renewal — This is frequently the first item that captains build and should be prioritized in most games. The sheer amount of healing that Fountain provides on top of its passive allows you to tank poke damage between fights.

Fountain of Renewal is most effective when activated while your carries are of considerably low health (the lower the better). However, during some team fights, your carries receive more damage than Fountain can heal. Time the activation precisely!

Its team-wide Reflex Block active is most effective against enemy compositions with heavy crowd control (abilities that can stun, slow, etc. — such as Phinn’s Forced Accord, Catherine’s Blast Tremor and Adagio’s Verse of Judgement). Being able to immediately provide a barrier for allies compared to the slow acting Fountain, Crucible can be considered the superior item for a captain against bursty enemies.

War Treads — This item is the most natural progression for captains to build into from Travel Boots, as they provide more utility than other boots. They also add extra tankiness so you can soak in more damage during a fight.

War Tread’s activation gives your entire team a speed boost, aiding them in engaging (starting) fights or pursuing kiting enemies who keep your carries at a distance while dealing damage. Conversely, its activation can help with disengaging (leaving fights) or helping your carries kite away from sticky enemies.

These items are often seen in captain builds, but are built according to the draft  picks and situation.

Note that Atlas Pauldron also affects abilities which cooldowns are based on attack speed, such as Gwen’s Boomstick and Joule’s Thunder Strike.

SuperScout 2000 — Free-flow Scout Cams and Flares! Who wouldn’t want that? SuperScout 2000 is used to gain an upper hand in the captain’s vision war. Having a constant source of Flares without needing to shop is a boon, especially in the late game — where predicting the enemy’s position becomes more difficult. The extra cooldown also lowers ability cooldown timers for more frequent utility. Build SuperScout when you feel like you’re struggling to maintain vision control over the map.

Clockwork — Clockwork allows captains to quickly dish out crowd control and refresh their abilities while doing so. However, this items tends to be more favorable for mages since it allows them to spam energy-hungry abilities with short cooldowns. Clockwork lacks the defensive stats that captains require to remain viable as tanky supports.

Captains who would be able to make best use of this item are those who have long cooldowns on ultimates and deal damage to enemies with their other abilities.

Nullwave Gauntlet — 5 seconds of item silencing is a longer duration than Catherine’s Blast Tremour (3.5 seconds) and Vox’s Wait for It (0.7 seconds).

Having problems with a second round of ability usage? Just fire Nullwave Gauntlet when the enemy Celeste is using her first ultimate. This prevents Celeste from copying her ultimate until the silence is over. This would force the mage to make a choice between using her other two abilities during this period and waiting until she can copy her ultimate.

Nullwave Gauntlet was the designated counter to Echo, but also heavily counters Crucible/Reflex Block. It can be cunningly used to bait out or nullify a player’s Reflex Block, followed up by a debuff, stun, slow or some other form of crowd control. For example, use Nullwave on an enemy carry, followed by Ringo’s Hellfire Brew. Or use Nullwave on the captain before using Phinn’s Forced Accord. When used on the enemy captain, they would either be forced to activate their Crucible or be unable to activate any items — including War Treads and Fountain of Renewal — for a significant period of time.

Nullwave Gauntlet can also be used to deny enemy carries their boots activation and thus cut off their escape. This can be useful on captains who lack crowd control or if their abilities happen to be on cooldown during a chase.

These items are more rarely seen in captain builds and are generally overshadowed by utility items. Think twice before purchasing them!

Echo — Echo’s main gimmick is being able to use two abilities in succession, but we need to remember that it takes up an item slot. Also, its recipe to reach tier 3 costs 1500 gold — the most expensive upgrade in Vainglory, even more than the upgrades to Shatterglass and Sorrowblade (1300 gold).

Echo’s active works best on captains whose abilities have long cooldowns and bring utility to the team.

Aftershock — With its stats and passive, Aftershock provides captains with that extra “kick” whenever they initiate a fight. The 50% lifesteal from its passive also provides tankiness. Great for captains whose abilities proc Aftershock (if their abilities include basic attack effects).

Poisoned Shiv — Providing heroes the ability to apply mortal wounds every second basic attack, Poisoned Shiv is the way to counter teams running Adagio and Lyra or relying heavily on Fountain of Renewal. That -33% healing debuff on enemy carries is going to hurt a lot, as it denies them the support they should receive.

Mortal wounds also reduce barrier and fortified health. That means Poisoned Shiv directly counters sustain heroes such as Krul and Reim, who rely on heals. However, in that instance, your weapon carry will most likely be building this. Captains should prioritize other utility items.

Shiversteel — Shiversteel is typically built to prevent a sticky enemy from reaching a squishy ally, or to let your carries reach a kiting enemy.

However, with abilities that provide slows outstripping Shiversteel’s utility (Adagio’s Gift of Fire, Flicker’s Fairy Dust, Gwen’s Buckshot Bonanza), this item has taken a backseat from the build lineup.

Shatterglass & Dragon’s Eye — With the raw crystal power, Shatterglass is generally limited to Grace, Adagio and Lance among the captains. This is because their abilities have utility that scale with a crystal ratio.

Alternatively, if you tend to participate in long team fights, with sustain or tanky heroes as allies, you can consider getting Dragon’s Eye instead as it scales well with team fight length.

Aegis & Metal Jacket — These two items are mostly unconventional to buy as a captain, since they are “selfish” items and don’t bring utility to the team. However, they are effective in keeping your captain alive as you body-block abilities from an irritating Kestrel or Skaarf.

If you are a beginner, consider other utility items first. It takes some experience to know when to buy these two items for effective use.

These items are generally bought in the early game, then sold later on in the mid-to-late game when their usefulness diminishes.

Ironguard Contract — Ironguard Contract is typically one of the first two items that captains purchase at the start of the game for 3V3 matches. With the advent of 5V5, however, its popularity has waned significantly.

Nevertheless, Ironguard Contract is still useful as it is able to provide extra health and energy that your ally needs to sustain in lanes, or clear faster with abilities in the jungle. The key merit of this item is the amount of energy it provides, allowing your allied mage such as Skaarf or Celeste to keep farming and dishing out abilities for longer periods of time without needing to recall.

Protector Contract provides 120 barrier to all nearby allies, with a 15 second recharge time and 2 charges available. That’s basically a multi-hero Vanguard (120 barrier at level 2) available more often than the ability itself! Like most other contracts, however, its effectiveness fades off during the late game, so sell it when you need the slot for other items.

Dragonblood Contract — In the early game, that extra 100 crystal damage can swing the fight in your favor. Dragonblood Contract is especially useful when you expect to activate it around multiple enemies — during jungle invades or counter-ganks in the lane.

Remember, you can just buy the banner, and then sell it later when it is less useful in the late game!