A Guide to Situational Items for Carries 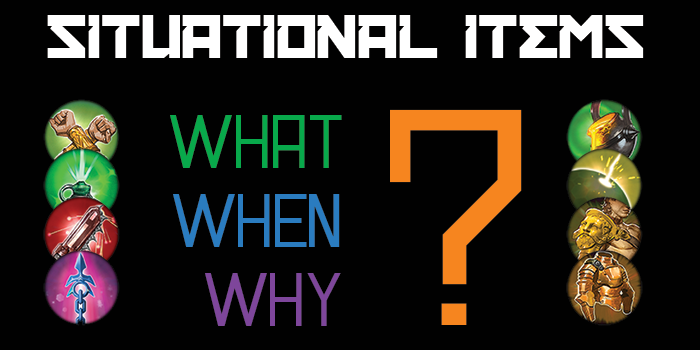 This article has been updated. Please read our new Situational Items for Carries guide.

Aegis – A combination of a Reflex Block and raw shield, this item is the ultimate anti-crystal-damage defensive item. This is by far the most common T3 defensive item built on ranged carries such as Ringo, Celeste, Vox, Skaarf, Skye, SAW, and Kestrel. Reflex Blocks are ubiquitous among high-Elo players, and there’s almost always a CP carry on the enemy team to counterbuild – Aegis wraps up both of these into one neat package. On ranged carries, Aegis is usually built as a third T3 item or later. Many melee heroes such as Krul, Koshka, Glaive, Rona, and Blackfeather will build a Fountain of Renewal over Aegis as a defensive shield item because the team heal is more beneficial than some extra shield. However, they will sometimes still build an Aegis if they need even more shield.

Atlas Pauldron – This item is a great choice on most melee bruiser-type heroes such as Krul, Koshka, Glaive, Rona, and Blackfeather. It should be built if there is a threat on the enemy team that relies heavily on auto-attacks to deal damage – typically a hero such as Ringo, SAW, Krul, Rona, Glaive, Vox, or Blackfeather. Usually, this will be built as a second T3 item or later. A notable exception is Blackfeather – high-Elo lane Blackfeathers will sometimes rush an Atlas Pauldron as a first item against an enemy Ringo. This gives Blackfeather tankiness with the early armor (allowing him to farm more safely) and it has the potential to shut down Ringo’s damage output in teamfights. On ranged carries, this item isn’t often built – your support or melee ally should build an Atlas Pauldron for you. However, against particularly sticky heroes such as Blackfeather and Krul, it can sometimes be helpful to build Atlas Pauldron as a third T3 item or later.

Bonesaw – Bonesaw’s passive effect makes it the natural choice against heavily armored enemies. Usually built as a third T3 item or later, it is most effective against enemies sporting a Metal Jacket or look like they are building into one. It is most often seen on Ringo, SAW, Vox, and sometimes Krul.

Crucible – The lane or jungle carry typically does not build a Crucible. Although it does add a fair amount of HP, you get get more EHP (effective HP, explained here – but ignore the numbers, since they’re outdated!) out of building a specialized defensive item such as Aegis or Metal Jacket. Carries will usually only build a Crucible if they really need the extra Reflex Block after already finishing an Aegis. If you do build a Crucible, it will often be built as a fourth T3 or later.

Metal Jacket – As Aegis’ armor-centric counterpart, Metal Jacket packs a lot of armor into a single item. Unlike Aegis, however, Metal Jacket lacks a Reflex Block, so a carry that builds this item will often end up dedicating two slots to defensive items. Because of this, and the fact that most weapon damage output is avoidable with good positioning, this item is less popular than Aegis. If you keep getting killed by a WP carry as a squishy, though, you should probably build one! As a bruiser, you should probably build an Atlas Pauldron over a Metal Jacket for the team utility that it provides. As with Aegis, a Metal Jacket will usually be built as a third T3 item or later.

Reflex Block – This item is amazing. Seriously. It gives you a flat 200 HP, which is admittedly unimpressive, but its active effect is extremely powerful by virtue of how flexible it is. It can be used to block devastating CC (crowd control) effects such as stuns, silences, slows, or pulls/pushes, or it can be used at the end of a fight to block otherwise fatal damage. If you’re playing a squishy carry, you’ll want to build a Reflex Block right around when you hit level 6.

Shiversteel – Shiversteel is a fantastic item for bruisers to help them stick. It’s typically considered a core item on Krul (first T3 item) and Blackfeather (second T3 item), but it can also be extremely useful on Glaive and Rona (third or later) to lock down a squishy enemy carry. Because Shiversteel has a drastically reduced effect for ranged heroes (a 0.6s slow vs. 2.0s slow for melees), it’s almost never built on ranged carries.

That’s all, folks! If you found this article helpful and haven’t read its counterpart for roam heroes yet, do so here!