Vainglory Minion Candy: The Sweet Treat that Nobody Eats 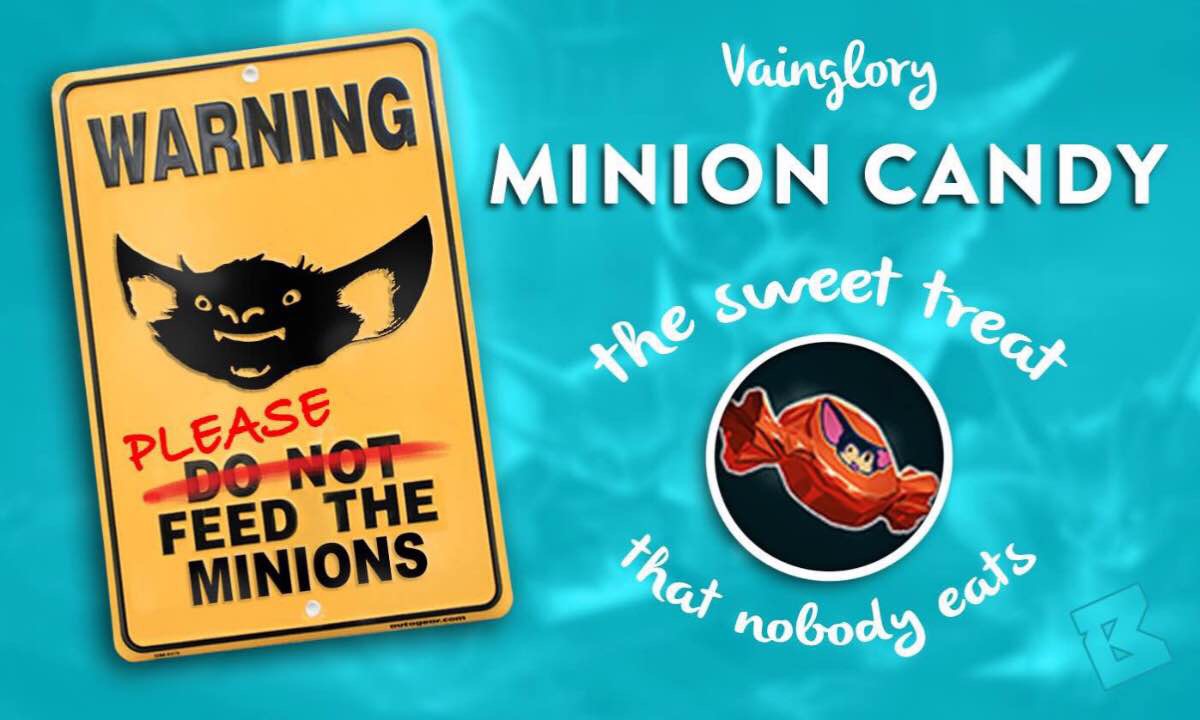 It’s small. It’s cheap. It’s powerful. And best of all… it’s FOOD. Minion Candy is the silent killer of the Halcyon Fold — an object that amplifies success when your team is ahead in the game, and can turn the tides when you need to catch up. Yet it’s such a small item, that few players ever bother to pick it up.

Increased attack power
Minions are given a 40% damage increase. This includes damage to enemy heroes and damage to turrets.

Increased defense
Minions are given 120 armor and 60 shield — that’s almost equivalent to equipping your minions with a Metal Jacket and Light Shield!

Duration
60 seconds for lane minions, and 30 seconds for Crystal Sentry and Gold Miner (yes, Gold Miner can be candied). In comparison, an Infusion lasts for 150 seconds.

Faster, bulkier minions? That’s similar to giving minions mini Weapon Infusions and Sprint Boots all in a delicious consumable… for a measly 50 gold.

Lack of Candy in Everyday Meta

If Minion Candy is so powerful, why aren’t players using it?

Frequent Problem of Inefficient Use
Unlike a Scout Trap or Flare — which are always in high demand and provide ever-needed vision — Minion Candy requires targeted usage for its effects to be significant. Randomly candying a lane wave or Crystal Sentry isn’t going to help your team; lane minions could just be swallowed by an enemy turret and Crystal Sentry could just be avoided by the enemy. Players often inefficiently use Minion Candy, leading them to believe that it isn’t really worth buying.

Lack of Visible Presence
The effects of Minion Candy aren’t as flashy as a Flare or permanent as a mine — players don’t immediately feel the presence of Minion Candy. Yes, candied icons appear, but lane minions are still doing damage, they get taken down by the turret, and within a few seconds the minions are gone. Most players don’t observe the buff that candied minions obtain — they still “feel” like normal minions. Because the consumable item when used isn’t “felt” by players, Minion Candy is often perceived to be unrewarding.

Silent but Deadly
But pro players know otherwise. In Vainglory’s first Worlds 2016 event, Minion Candy was one of the key items behind Invincible Armada’s lane pressure — early game strategies that led them to victory. Even in today’s professional tournaments, Vainglory8 teams still use Minion Candies during appropriate times to push for victory. While Minion Candy’s effect is significant, its presence is rarely noticed or commented on by spectators.

When and Where to use Candy

Minion Candy has to be used in specific situations to maximize its potential. Here’s a list of situations that are ideal to feed minions their sweet food:

Pressuring the Lane
If you have a team composition that’s focused on sieging turrets, Minion Candying the lane wave is a great way to increase the pressure on the turret. Heroes such as Kestrel, Lyra, Skaarf, SAW and Samuel have good turret siege potential, because they can camp near the enemy turret for long periods of time and deal significant damage from afar.

By candying the lane, minions can tank more turret shots and are more resistant to enemy hero wave clear, buying you more time to bring down the enemy turret. A candied lane left unsupervised can also greatly damage a turret, so if there is a major fight going on in the jungle, candying the lane and rotating down to help will also put pressure on the lane.

Conversely, if the enemy team has a siege-based team composition, occasionally using a Minion Candy can help to alleviate the lane pressure that they have, because the buff can help stall their wave clear and prevent them from pushing all the way to the turret.

Anyone can get Minion Candy. It doesn’t just have to be the captain who purchases the consumable. In fact, having a candy in the carry’s pocket is pretty useful. Remember it’s only 50 gold!

Minion Candy is a delicious treat that buffs your minions for pocket change. As a captain or carry, keep a Minion Candy with you — it can be used both offensively and defensively.

Plus, why not give those minions the sweet food they deserve???