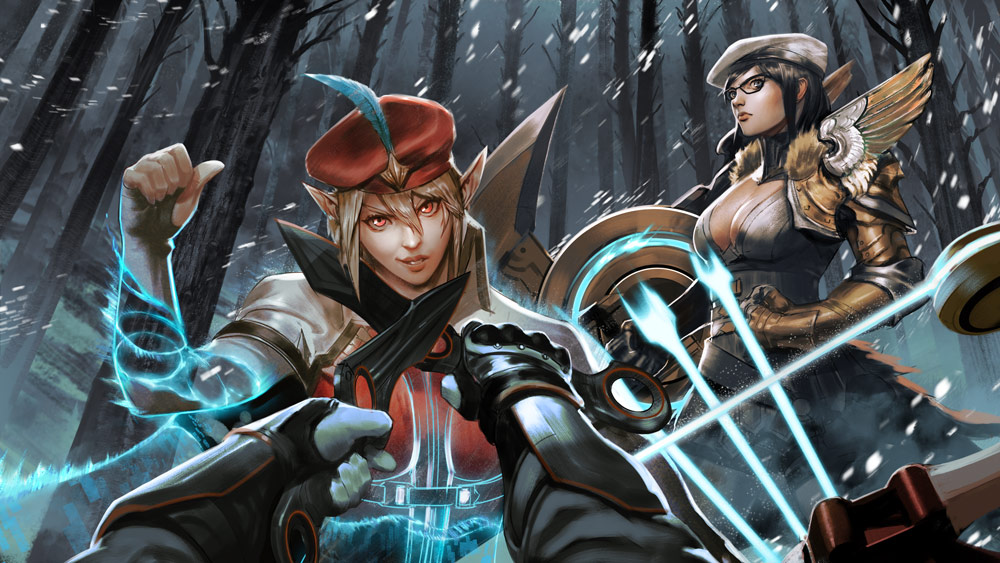 Ever hopped into a Ranked game by yourself and wondered if your teammates would cooperate? Or wanted to learn how you and your party members could play as a more cohesive unit in the game? In-game pings, hero draft and team compositions can be used to optimize synergy in games, whether as a solo queue player or in a team. Let’s take a look at how you can achieve the most pleasant game experience!

Solo queue takes a bit more luck for success in terms of synergy as opposed to team queues. However, this doesn’t mean there aren’t necessary steps to take action to try to set up synergy within the team. In this mode of Ranked, being able to keep toxicity at bay and remain calm is a key factor in the success of the team. Unlike in team Ranked, your enemies are also strangers and will face similar issues, so don’t think you’re the only one facing the challenge of working with completely unfamiliar players!

Just like in team queue, you aim to have a winning draft. However, in this mode, you almost always want to be a friendly and team player. Place your role, but don’t be overly fixated on it, and be flexible. If someone puts the same role as you, try asking them if they’re willing to give in; if not, you can flex into the other missing role. A team with all roles is far better than one that is missing any role (I mean, you wouldn’t want two middle laners and nobody supporting them, right?).

Try to be flexible and never resort to toxicity, even if others are. Try your best to remain tilt-proof. Also, in solo queue, pick your own hero for your own role, unless someone else requests that you pick a hero to swap with them. This way, you can stop any miscommunication from taking place and eliminate most stupid mistakes in draft.

Now this is where things get more complicated. In a solo queue match, there is always the likelihood of someone on your team being seemingly “bad” or “boosted,” and you can’t help wanting to yell at the player. Remain tilt-proof, stay calm, and just play the game. Focus on your own game and don’t care about how others are playing. Tilt and toxicity together are the culprits for destroying team synergy, especially in solo queue games.

While you have a shot caller in team queue, there isn’t really one in solo queue, so you have to step up to the plate and ping tactically — not with malicious intent. If your teammates decide to follow you, good for you! If they don’t, then do not continue. You have to work as a team, and sometimes that means not having a “perfect” or “ideal” game plan unfolding within the game. What is most important is respecting everyone’s choices and working as a team.

Be encouraging and humble as well! When a teammate makes a play or gets a solo kill, give them a thumbs up or a cheers to encourage them to keep it up. If your team is on the losing end, then use a “Don’t give up!” ping to try and rally your team to keep the morale up and turn the tides. If you make a misplay, say “Sorry, my bad.” so that your teammates can hopefully know that you’re a player who recognizes his own mistakes and is willing to improve upon it. This normally keeps most players from being toxic. However, too much of anything is bad. Don’t excessively ping your teammates, and always try to have an optimistic view while playing. Remember, it’s a game, so have fun and try your best to win!

If a teammate is being extremely toxic, then press the mute button so you won’t get distracted. However, if you find the toxicity bearable without it affecting your gameplay, then try not to mute them. Even the most toxic of players normally have some form of game plan in mind as well. It might be worth listening in to their opinions too.

Team queue has its pros and cons. On one hand, you are playing together with teammates you know you can count on (well, at least you know them well enough to invite them); however, on the other hand, you are also facing other team parties, especially if you are in a full party. So, assuming that both sides have similar mechanical skill, then the defining factor that splits the winners from the losers comes down to team synergy. Below shows the different methods by which team queue synergy can be improved.

As a team, you have access to the party chat while queueing for the game and voice chat throughout the entire match. Use this to your advantage. Discuss who should play what role, and use the little time you have (assuming you do not talk about in-game strategies outside of the party) to have a rough hero pool drafted out for each player and to also know what their comfort picks are. These all come in useful in draft.

Players should also speak to each other as to what their play style is like. Are you more of an aggressive player who looks for the plays and makes opportunities, or a passive player who waits for opportunities to arise and capitalize? These all account to how well you know your team to plan for how you want to play the actual game. Another important point is to decide on which player is going to be the shot caller — the person who directs the team toward overall objectives and makes split-second decisions for the benefit of the team.

This is the draft phase, where both sides get to pick their heroes. Players should always ensure that they look to use the voice chat or party chat to discuss hero picks. Try to grab a mix of counter picks and comfort picks. Heroes also have their own unique play styles, so don’t draft a hero that your teammate isn’t comfortable on. This falls under draft strategies, but it will still impact your overall game. While a game is meant for fun, try not to be too sarcastic or too overboard with jokes, as sometimes people take them seriously (no, you shouldn’t ask for a SAW ban). Use the draft to get an edge over your enemies and also make sure that everybody is fine with what they have.

Once the draft has been completed, there is a short time window before the game begins. Use this time wisely to let the shot caller or the most “analytical” member of your team quickly state your team’s win conditions and how to play the overall strategy out.

Throughout the game, different players have different goals. As a team, use the previous knowledge of your teammates’ play styles to understand what they might be going after and also choosing to use the in-game pings wisely. If you’re the shot caller, these are extremely important to rally your team toward common goals. For example, if you just won a team fight, then as a shot caller, you should direct your team to take one (or both) of the dragons to get ahead and extend the lead. If your team is behind, make sure you ping your teammates to be careful and not to overextend.

However, the shot caller isn’t the only one who should be using these pings. Within the game, there’s also going to be lots of skirmishes over the map. If you notice an enemy coming to gank you, or you know you need to teleport while an enemy is trying to push, use the “I need help!” ping. Not everyone is able to watch the entire map all the time, so give your teammates a quick message using the ping for someone to rotate when they can. As a teammate, always look out for these pings. Try to offer your help to the best of your abilities, whether it means rotating there, or sometimes just casting a global ultimate (e.g. Celeste, Baron, Kestrel). Be a team player and help one another.

When you’re diving onto an enemy, always make sure you ping that you are after the enemy as well so that your teammates know what you intend to do and can have the appropriate follow-up. You never want to be diving alone for most scenarios.

All in all, voice out your opinions and listen out for your teammates’ as well through clever use of the in-game pings, and your team will soon be on the path to success in terms of synergy. If you’re a party that plays with one another frequently or a team, then make use of each game to accumulate experience with one another. Learn to anticipate what may be going through your teammates’ mind so that you can build on your internal synergy with one another as fellow players.

Solo queue and team queue both have their different qualities when it comes to synergy and how it can be built. Whether your team can work together relies heavily on each individual’s communication. If everyone can communicate with each other what they hope for and can also take into consideration the thoughts of others, then some form of synergy will form right off the bat. Accomplish this feat through strategic in-game pings, and always keep toxicity at bay; that way, you and your team can become a more cohesive unit, working hand in hand to head for victory!

Guild: Karma Police
Just another student trying to express his love for Vainglory and Varya.

Latest posts by Estreal (see all)